Saw an article that 3 CPS workers are being indicted for various things. Being involved in the shared parenting groups, I have heard a number of horror stories involving CPS..My boys and I have, unfortunately, too have had to deal with CPS due to the ex-spouse and her shenanigans.  Glad that someone is holding this group accountable. There is a “need” for CPS, but with it being a bullet point on the “silver bullet ” checklist, it gets abused all too often…and unfortunately, CPS aids (and even knows it) in all of this. 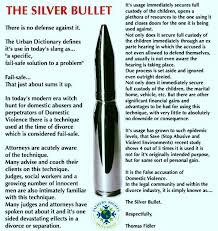 My experience with CPS has ultimately been positive. Back in 2011, after years of increasingly degrading relationship with my nutty ex-wife, she tried to initiate the ole silver bullet on me. the previous 5 years, she began her “I don’t like you” campaign and began thinking I was trying to “do something” to her? In hindsight, all the signs were there that she was going bat shit crazy, but it was kinda like being a live frog being slowly cooked: 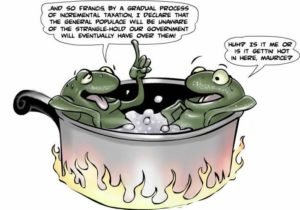 Will never forget the day for as long as I live,  I get a phone call from the little actress distraught that our oldest, David was crying hysterically and wouldn’t calm down. Mind you I was at work and in the middle of a HUGE implementation, however, as usual, dropped everything to address this.

I race home and try to calm David (and Daniel) down. He keeps saying over and over that he was sorry and feels horrible over what happened. The summary is that Daniel Lester, CPS came to David’s school and (without my knowledge) pulled him into a room and questioned him all about me. Do I do drugs, do I drink, do I hit mommie, am I gay, do I do illegal stuff, do I own guns, etc.? He felt like they were trying to “find” something with me.

I kept reassuring him that he did nothing wrong, as long as he told the truth, he did nothing wrong and nothing will happen to Dad. The liar was sitting there looking bewildered, concerned even about what was going on. In the back of my mind (because I still had not realized what a piece of lying trash she actually was)  I was trying to figure out what happened.

After I calmed David and Daniel down and got a chance to talk to the actress. I was trying to figure out what neighbor, what teacher, what person would call CPS on “us”? It was no secret that I was a gun guy and maybe some neighbor called because David or Daniel mentioned it in class. Maybe a teacher overheard something (the teachers would scowl at me when I came to see David for reasons I hadn’t figured out yet).  I even looked at her and said “with all of the stuff that is going on, maybe your sister did something?” She said there was no way, blah blah blah.

So, a few days later I had my interview with Daniel Lester. He was a nice guy. He apologized for what happened and said that David was a really good kid. He also told me that he could tell that David really loved me and it hurt him to be questioned like he was about his dad.

All of the questions were about me, which I answered. I asked when my lovely bride’s interview will be and he seemed puzzled (later I found out why). He told me that he couldn’t discuss anything, but I may want to start looking into “things”??!!

After it was over, the Ex couldn’t wait to discuss. She was very interested in how everything went and any reference I made to the whole thing, she just seemed “confused” over. I was trying to keep David and Daniel calm and was upfront on what happened and that they did the right thing and apparently it was all a misunderstanding.

I wanted to collect all the information I could (I’m a data guy) and found this in my home phone call logs: 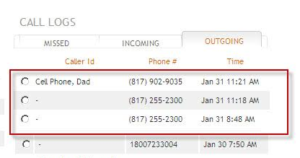 The two 817-255-2300 calls were to CPS and then the call to my cell phone. When I got home I questioned the little princess about why she would be calling CPS and then calling me, etc.? She of course, had no clue. Did some more investigative work (after the fact) and found this document written in her own hand: 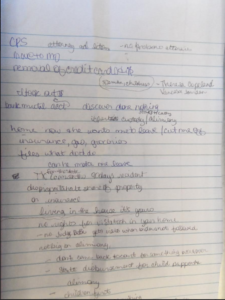 This was this stupid broad’s 3 point plan that she wrote down:

Then she had notes on current conversations with lawyers or whoever on her plan. Even had the judge she didn’t want to have during the divorce (oddly enough, that was who we got when we finally go to divorce court 2 years later). I was shocked at the (crazy) planning this moron was doing. I sat her down and told her what I knew and she told me that she did it, that she had also went down to a battered womens’ shelter on David’s birthday (he actually had a high grade fever and was sick, but whatever) and was trying to see what she could do.

And in conclusion, here is the removal from CPS database: 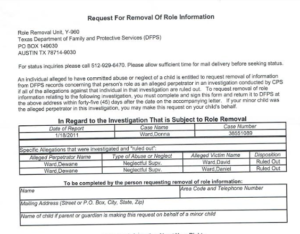 There are bad CPS people, obviously, however, this experience had a proper ending. I just wish that people that filed false reports would get prosecuted. While I will write about it more, the piece of shit knew that she would get roasted in court on this, so she played nice and waited until the time had run out to start up more of her nonsense. Crazy, just crazy.