Kentucky passed the first “50/50” custody bill in 2017, HB 492 becoming the first state to have a version of the equal shared custody standard that groups have been fighting for for decades.

Within 2 years of the bills passing, reports show that domestic violence, aka the silver bullet, is down and oddly enough divorces have also been reduced, but not all is good in the state of Kentucky. This article published January 2020 states the “united we stand, divided we fall” state is “on the brink of losing federal funds”.

As this video explains, the natural consequence of equal shared parenting is that child support for the state is significantly reduced, which in turn reduces the amount of federal Title IV-D funds the state receives.

Kentucky, like other states have become dependent on the millions of federal funds they receive for their state budgets. Again. child support is NOTHING more than a welfare recovery program. It does not benefit the children, but rather it benefits the state. Kentucky is seeing the direct result of that.

Of course they cannot say the real reason why they have to have federal child support funds coming in so they bring in 1 “single” mom up to talk about her “struggle”. Kinda like the Coronovirus conveniently coming in to take away from the riots and civil unrest in China…wink wink.

This is why Texas and other states will NOT pass equal shared custody bills(we have been trying for over 12 years, see this news broadcast for more info), the loss of federal funds. A prominent political figure in 2020 told an equal shared parenting advocate, “We have a 40% budget shortfall every year that the Title IV-D funds cover. We will NEVER pass equal shared parenting.” Review of the Texas State budget confirms this information.

In the first ever study produced of the taxpayer financial impact due to all of this, the conservative estimate is “at least $112 billion each and every year”.

The states know the impacts, the financial, the emotional, etc…..they just do not CARE as they are more interested in money than your children’s well being. They will jump through all kinds of mental hoops to continue the charade.

In fact, their money hungry ways have gotten so bad, they are trying to get federal funds for UNBORN children, pinning the child on anyone the mother claims is the father (she can refuse a DNA test). They have already proposed the modified language in title IV-D for this: 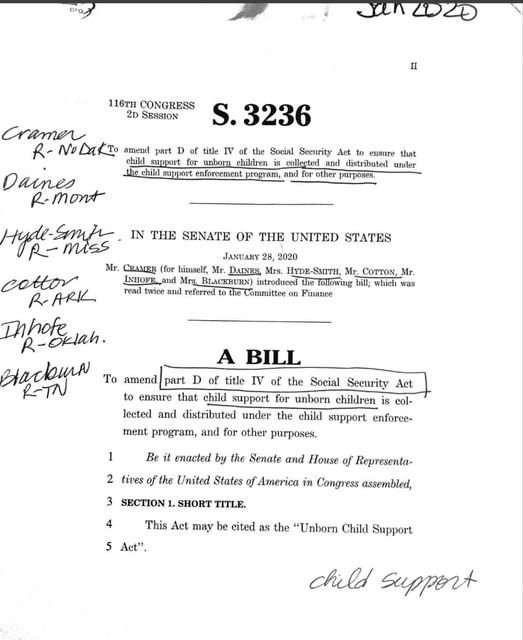 This will mean a woman can pick any man, living or dead, name him (and we will assume she will be smart enough to go after high earners) as the dad and refuse a DNA test (thank you MeToo movement) because she is just be “believed”.

The states, understanding what predictably would happen to Kentucky, have come to rely on the federal government for money(i.e. a baby daddy) and are willing to stoop to these lengths to get it.

They do not care about your children, just your money. 50/50 will never get passed because they all know (Republican, Democrat, and Independent).

The only way this is going to change is for everyone collectively to demand it. If you are on the government teet, get off of it. If you are receiving child support, stop it!