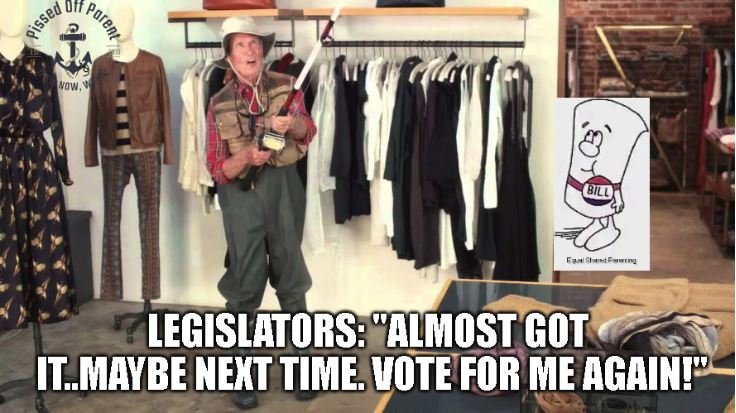 The definition of insanity is “repeating the same mistakes and expecting different results.” Although this saying is attributed to Albert Einstein, it actually appeared in a narcotics anonymous publication….but enough with the “Cliff Clavinisms”…..

Whoever said it, they obviously were thinking of family court reform.

I have been involuntarily involved in this shit show for the last 6+ years. The things that I have seen on all sides of this unbelievable nonsense are mind boggling.

The reality is….is that in large part, the OAG, shitty parents,  lawyers, judges, legislators, and even people in the equal shared parenting movement are fine with the way things are….kind of like professional wrestling, they blather on and on, but at the end of the day they are all buddies.

Here is the reality, EVERYONE knows the data behind the damage to children(the data is collected by the government, for the government)….its just that money or their sick and twisted worldview  is more important to them.  We have 40 years worth of hard data that shows the impacts of all of this, but you have the lawyer groups out and out lying, judges that want to play God (and are incentivized to do so), politicians that will say anything to get elected, the list goes on and on.

Then you get to the people that are impacted and their out and out apathy. There is a handful of people that are trying to make a difference (and not in it for the money, y’all know who you are) and spend countless hours and their own money to help people, only to have it ignored or crapped on.

Case in point, one area where we can make a huge difference is in the area of court watching. In the past, in order to court watch, you’d have to take off work, go into the city, pay for parking, and wait around to sit in a court room. Studies have shown that when judges are being watched, they tend to be fairer.

With covid-19, you can now just log into a youtube channel, not even watch the hearing, but just be “present”. To help with this, a form was made and the link was distributed. This is a dream request, to have people attend your hearing so you get a fair shake. To date, 1 person has used it.

People say they want change, but they are too lazy to put forth ANY effort. Rally’s have been put together, no one shows up. Email requests have been made so that teams can direct efforts…..no one does it. I can say this because I have the real data from behind the scenes with the largest equal shared parenting organizations. Data does not lie.

Me personally, I spend about $200 a year on hosting alone for a data driven website, countless hours developing materials, helping other organizations, helping other people, etc.  for nothing. There are hundreds of thousands of people impacted by this nationwide, the level of apathy is astounding.

With legislators, they really do not care. Its all votes and useful idiots. Think I am mean? We have had 12 years of bills and they have all died for silly reasons. But, we get a lemonade stand bill passed with all the hoopla of ending roe v wade. This is not opinion, this is fact.  Its ridiculous….all of it.

I guess where I am at, is everyone needs to get off their lazy asses and do something. If you want change, stop bitching about it and actually do something. Even if that is signing up to press 1 flipping button on your phone….sheesh!

This picture is the way it is suppose to be: 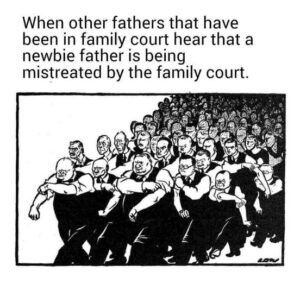